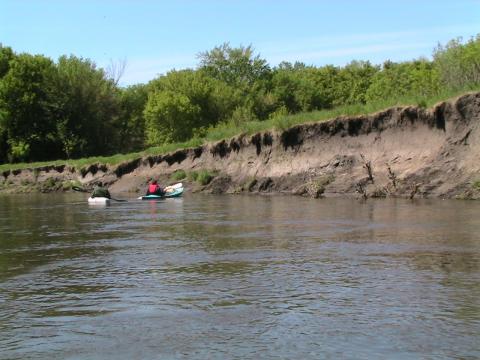 Streams in the Minnesota River and Greater Blue Earth River basin suffer from high turbidity: Soil and other particles muddy the water so that it often fails to meet water quality standards that protect fish, insects, and other aquatic life. Sediment and other suspended materials in water (referred to as total suspended solids or TSS) can affect fauna by reducing visibility, clogging gills, and smothering habitat. Sediment buildup also affects navigation in the Minnesota River near the Twin Cities and threatens the long-term future of Lake Pepin.

The MPCA and the environmental consulting firm Tetra Tech have developed a total maximum daily load report for TSS in the rivers, which looks at the amount of TSS they could carry and still meet the water quality standard.

The Minnesota River begins near the Minnesota-South Dakota border, flowing for 335 miles before joining the Mississippi River near St. Paul. The basin includes all or parts of 37 counties, draining a 17,000-square-mile area. The river and its tributaries provide important economic, ecological, recreational, and cultural benefits. The ecosystem provides food and habitat for fish, birds, and other wildlife. It supports agriculture (the primary land use in the basin) and boating, fishing, and camping recreation and many riverside trails.

The Greater Blue Earth River Basin includes parts of 14 counties in south-central Minnesota and northern Iowa, and three major watersheds (Blue Earth, Le Sueur, and Watonwan) that ultimately drain to the Minnesota River near Mankato. The basin covers 3,540 square miles and is home to around 90,000 people. This basin is one of the largest sources of sediment in the Minnesota River basin.

The MPCA and environmental consulting firm Tetra Tech drafted a new TMDL based on the 62 impairments for turbidity and total suspended solids (TSS) along the Minnesota River and its tributaries, including all of the turbidity- and TSS-impaired streams in the Greater Blue Earth River basin (Blue Earth River, Le Sueur River, and Watonwan River watersheds). The project area covers the nine eight-digit hydrologic unit code (HUC8) watersheds from the outlet of Lac qui Parle Lake to the mouth of the Minnesota River at the confluence with the Mississippi River at Fort Snelling.

The approach to the current TMDL and to the draft TMDLs that were public noticed in 2012 is similar, but there are some significant changes based on stakeholder comments and new data. The primary differences are summarized in this document:

The TMDL report was open for public comment from July 22 to September 20, 2019. The MPCA thanks everyone who submitted comments. Each comment was fully considered and in many cases resulted in edits to the report.

In 2012, the MPCA developed TMDLs for turbidity-impaired waters in the main stem of the Minnesota River and for stream reaches in the Watonwan River, Le Sueur River, and Blue Earth River watersheds. These draft TMDLs were based on the turbidity water quality standards in place before state TSS standards were adopted. When the state water quality standard changed from turbidity to TSS, the allocations for impairments in both TMDLs had to be recalculated. The agency decided to withdraw the draft TMDLs and redevelop them as one TMDL report, using the new TSS standard. For more information on the 2012 reports, public comments, stakeholder and advisory committee materials, and other documentation, contact the staff listed below.