Climate impacts on the environment 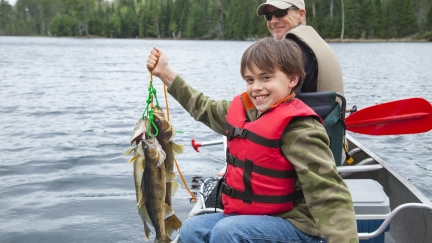 Climate change is having a profound impact on Minnesota's natural environment. Many of our state's iconic native plants and animals — from birch trees to walleye — are threatened by warming temperatures and shifting weather patterns.

Changes to plants have far-reaching effects

As our climate warms, Minnesota's northern tree species liked paper birch, quaking aspen, balsam fir, and black spruce may start to die out, with populations moving further north. Warmer-climate tree species, like maples, oaks, and hickories could take their place. These changes in tree cover are accompanied by changes in wildlife and soil habitat.

Higher temperatures, in combination with increased stormwater runoff and erosion caused by heavier rain, means that many bodies of water will be home to algae blooms. Such blooms can negatively impact species that may benefit from warmer water, like bass, by removing extra oxygen in the water, essentially suffocating the fish that live there.

Migratory animals, which many Minnesotans are excited to see every year, are also being impacted by climate change. With less predictable temperatures and rainfalls, birds are arriving earlier, and their breeding seasons are moving up in the year, too.

Even animals that stay in Minnesota year-round are experiencing changes in the timing of food availability. This is a problem because not all species of animals and plants have reacted the same to changes in temperature or rainfall, meaning that a bird that arrives earlier or deer that breed sooner may end up not having enough food to sustain themselves. The timing of native and honeybees emerging and plants blooming is presenting a problem, as well, which could have far-reaching and lasting consequences for native and cultivated species.

On Minnesota lakes, ice coverage has declined an average of 10-14 days in the last 50 years, according to data collected by state agencies and volunteers. Since 1967, ice-in dates have moved about 9 days later on average, while ice-out dates have moved about 4-5 days earlier. That means 2 fewer weeks each winter for ice fishing, snowshoeing, cross-country skiing and snowmobiling across our state’s lakes. While individual lakes will vary in ice coverage from year to year, the data show a statewide trend of shorter ice seasons.

Compared to 50 years ago, the average July-August water temperatures in Minnesota lakes are 3.0 – 3.9°F higher.

A few degrees may sound insignificant, but the ramifications to natural conditions are monumental. For example, toxic blue-green algae thrive in water that is 75°F and warmer. Fish populations may also shift. Warm-water species like large-mouth bass and carp may migrate north, while cold-water species like brook trout and cisco may decline in Minnesota. Walleye prefer water temps at 65 to 70°F during the summer, and smaller, warmer lakes may become too warm for them, driving their populations north as well.

“It’s mostly about a shift in what we consider natural conditions. It’s a big impact to our culture and recreation. We want to have lake trout and walleye in northern Minnesota. Who are we if we don’t have those species?” said Scott Niemela, MPCA supervisor of biomonitoring for the north region. “These fish won’t disappear in our life time, but their populations may shift.”

Learn more about changing lake and river conditions in Minnesota: