Cleaning up the St. Louis River 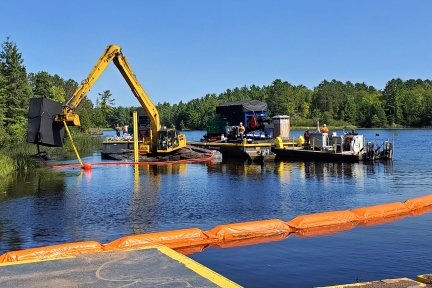 The MPCA is collaborating with many federal, tribal, state, and local partners to clean up sites in the Duluth harbor and St. Louis River that are contaminated from a century of industrial and shipping activities. The sites are part of an Area of Concern (AOC), one of 43 such areas in the Great Lakes region designated by the U.S. and Canadian governments, that show signs of significant environmental harm from local causes. The St. Louis River Area of Concern (SLRAOC), which encompasses parts of Minnesota and Wisconsin, is the second largest AOC in the U.S.

The St. Louis River Superfund site five-year review is open for public comment through February 10, 2023. This review evaluates to the implementation and performance of remediation actions at the sites.

A legacy of environmental harm

Before there were environmental regulations, wetlands and other aquatic habitat around the Duluth Harbor could be dredged to create anchorage slips for ships or filled in to make land for development. In addition, cities, industries, and businesses discharged their waste directly to the St. Louis River without treatment. Mercury and other metals, dioxins and furans, polychlorinated biphenyls (PCBs), polycyclic aromatic hydrocarbons (PAHs), and other toxins in these discharges eventually settled in the sediment at the bottom of the river.

Early environmental regulations, such as the Clean Water Act, only applied to ongoing activities, not the legacy of contamination and lost habitat from previous years. The AOC program was created to address legacy effects in the Great Lakes region.

The 1987 U.S.-Canada Great Lakes Water Quality Agreement that formed the AOCs identified 14 beneficial use impairments (BUIs) common throughout the Great Lakes. A BUI is a legal designation for a type of environmental degradation that affects how a natural resource can be used — thus, a "use impairment." Nine of the 14 identified BUIs applied to the St. Louis River AOC:

Each BUI must be addressed in order to reverse the legacy problems.

The importance of restoration

As it nears Lake Superior, the St. Louis River forms a 12,000-acre estuary, where the river water mixes with lake water. Strong northeasterly winds can push enough lake water into the estuary to affect water levels up to 18 miles upstream! Besides affecting water levels, this lake-river push and pull reverses water flows, flushes sediments, adds oxygen, and releases nutrients, creating a unique, biologically productive area that is rich in plant and animal diversity. The estuary supports more than 230 species of migrating and nesting birds, and provides habitat for 45 fish species, including spawning and nursery habitat for some western Lake Superior fish. It contains most of Minnesota’s imperiled coastal marsh habitat, including stands of the state grain, wild rice, which is central to Ojibwe culture.Reversing the impairments caused by legacy problems will help restore the St. Louis River estuary ecosystem. In addition, formerly polluted areas are becoming more enticing for recreation, such as paddling, birding, and fishing, and for economic revitalization, such as the pockets of redevelopment happening in West Duluth.