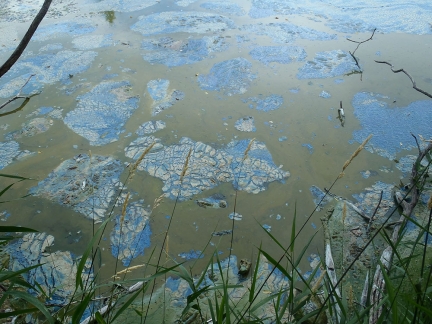 When temperatures climb and the summer sun beats down, conditions are ripe for Minnesota lakes to produce harmful algae blooms, some of which can be harmful to pets and humans. When in doubt, best keep out!

What are blue-green algae?

Blue-green algal blooms are often described as looking like pea soup or spilled green paint. However, blooms aren’t always large and dense and can sometimes cover small portions of the lake with little visible algae present. Blooms can also produce a swampy odor when the cells break down.

What are harmful algal blooms?

Blue-green algae blooms are harmful when they produce toxins that can make humans and animals sick. Most blooms are not harmful. You can't tell by looking at a bloom if it is harmful or not.

When do harmful algal blooms occur?

Blue-green algae prefer warm, calm, sunny weather and water temperatures higher than 75°F. Blooms usually occur during summer and early fall, but can occur other times of the year, if conditions are right.

Where are harmful algal blooms found?

Harmful algae can be found everywhere in Minnesota, but thrive in warm, shallow, nutrient-rich lakes. They will often be found on the downwind side of a lake or in a secluded bay or shoreline.

What are the possible health effects?

You can become sick if you swallow, have skin contact with, or breathe in airborne water droplets while swimming, boating, waterskiing, tubing, bathing, or showering in water that has harmful algae or if you drink water that contains algal toxins. If you become sick, you might experience vomiting, diarrhea, rash, eye irritation, cough, sore throat, and headache. Symptoms generally begin hours to two days after exposure.

The activities that put you in contact with the water — and the amount of time you spend on them — will affect your exposure to algae toxins. Children will generally be more affected than adults.

How can I reduce my risks from harmful algae blooms?

Avoid or minimize recreating in waters that appear to have a blue-green algae bloom; if you do come in contact with algae-laden water, wash with fresh water afterwards.

Toxins from algae can accumulate in the entrails (guts) of fish and occasionally in the muscle (fillet) of fish. Levels in fish depend upon the severity of the bloom in the area where the fish are caught.

In general, fish that are caught in areas of a waterbody where major blue-green algae blooms are occurring may be safe to eat, as long as the guts of the fish are discarded. However, it's uncertain how much algae toxin can accumulate in filets, so anglers may want to wait a week or two after algae blooms are over before fishing and eating fish from waters where a bloom is occurring.

Can animals be affected?

Pets, especially dogs, are susceptible to harmful algae because they are relatively small and tend to swallow more water while swimming and playing (e.g., retrieving a ball from the water). Dogs may ingest algae if they lick their coats after leaving the water. They are also less deterred by green, smelly water that may contain harmful algae.

To reduce your animal's exposure to blue-green algae:

Animals can experience symptoms within minutes of exposure to the toxins. Symptoms they might experience include vomiting, diarrhea, weakness, difficulty breathing, and seizures. In the worst cases, animals have died. If your pet experiences these symptoms after exposure to algae, contact your veterinarian immediately.

What should I do if I see a bloom?

There is no way to tell if a blue-green algal bloom is toxic just by looking at it. Adults, children, and animals should avoid contact with water with blue-green algae.  Toxins can persist in the water after a bloom; watch for signs of recent blooms, such as green scum on the shoreline. When in doubt, stay out! If you or your pet go into water where there may be a bloom, wash off with fresh water immediately afterwards.

How can we get rid of harmful algae blooms?

We can't eliminate blue-green algae from a lake -- they are an inherent part of the overall algal community. What we really want to do is control their overall intensity and the frequency of the blooms. Since we can't control the water temperature, the best thing we can do is to reduce the amount of nutrients getting into the lake. This can best be accomplished by reducing the amount of phosphorus and nitrogen from man-made sources such as lawn fertilizer, and runoff from cities, cultivated fields, feedlots, and a myriad of other sources. Though a reduction of nuisance algal blooms will not be immediate, it is the best long-term solution to minimizing the frequency and intensity of algal blooms.

Photos of non-toxic plants and algae