Access to clean and clear air is important for the health of all Minnesotans. Over the past 30 years, the Clean Air Act has resulted in drastic reductions in air pollution across the country. Regulations on the biggest polluters and emission standards on technologies such as boilers and vehicles have been very successful in lowering overall levels of air pollution in Minnesota and across the country. Today, Minnesota’s air is better than all national standards and nearly all health benchmarks.

The MPCA is responsible for understanding the condition of Minnesota's air, and there are many ways of looking at and measuring air quality. Each provides us a piece of the puzzle to understand how we are doing and where we need to focus in the future.

The Clean Air Act requires the U.S. Environmental Protection Agency (EPA) to set National Ambient Air Quality Standards for pollutants that are considered harmful to public health and the environment. The EPA sets standards for six common air pollutants — ozone, fine particles, lead, nitrogen dioxide, carbon monoxide, and sulfur dioxide. The MPCA monitors air pollution across the state and compares the results to these national standards. In 2015, monitoring results in all areas of the state were better than air quality standards.

The national standards are designed to protect human health and the environment. However, studies show that health effects occur even at levels below current standards and disproportionately impact disadvantaged communities.

Air toxics are a group of over 100 air pollutants that cause or may cause cancer or other serious health effects. Nationally, there are no enforceable regulatory standards for air toxics in the environment. Minnesota relies on guidelines called health benchmarks to evaluate the health risks from exposures to toxic pollutants in the air.

Locations with air toxics concentrations above a chronic health benchmark, 2015

To protect the health of Minnesotans, we work to ensure that concentrations of all air toxic pollutants in Minnesota are below health benchmarks. We monitor air toxics at nearly 20 locations in the state, with the majority of monitors located in the Twin Cities metro area. Each of these monitors measures over 70 air toxic pollutants. In 2015, the majority of monitoring sites measured air toxics concentrations below acute (short-term exposure) and chronic (lifetime-exposure) health benchmarks. Formaldehyde continues to be found above the chronic health benchmark at monitoring sites in the urban core of Minneapolis and St. Paul.

Despite consistent improvements in the number of good air quality days, the number of days with poor air quality varies from year to year. In 2015, across Minnesota, there were 12 bad air days. These bad air days were primarily due to elevated fine particle (PM2.5) pollution resulting from wildfire smoke transported in to Minnesota.

Learn about progress towards our greenhouse gas reduction goals and improving visibility in our most pristine places: 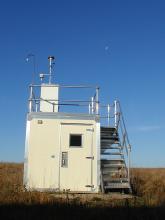 Use the interactive charts and data tables to view and compare statewide emissions for air emissions, air toxics, and pollution from industrial facilities.

See current conditions and sign up for air quality alerts and forecasts via email or text. Air Quality Index.