One of the most basic forms of air pollution, haze, reduces visibility in many cities and scenic areas within the United States. Haze is caused when sunlight encounters tiny particles of air pollution. Some light is absorbed by these particles; other light is scattered away before it reaches an observer. More pollution means more absorption and scattering of light, which reduces the clarity and color of what we see. Haze-causing pollutants come from a variety of sources, both natural and man-made, including motor vehicles, electricity generation, industrial facilities, agriculture, and wildfires.

In amendments to the Clean Air Act in 1977, Congress added Section 169 (42 U.S. Code § 7491), setting forth a national visibility goal of restoring pristine conditions in national parks and wilderness areas. These areas were designated as Class I areas.

To achieve the national visibility goals mandated by Congress, in 1999 the U.S. Environmental Protection Agency (U.S. EPA) established a regulatory program called the Regional Haze Rule under the Clean Air Act. This program created regulations designed to improve visibility in our nation's national parks and wildernesses (Class I areas) and restore them to natural visibility conditions by 2064. The Regional Haze Rule is found in 40 CFR § 51.308 and covers over 150 Class I areas in the United States.

What are Minnesota’s Class I areas?

What does regional haze mean for Minnesota?

States are responsible for developing a Regional Haze State Implementation Plan (SIP) that addresses regional haze in each Class I area located within the state and in each Class I area located outside the state which may be affected by emissions from sources within the state. The Regional Haze SIP is required to identify existing facilities that cause or contribute to visibility impairment; analyze, identify, and apply federally-enforceable control strategies for those sources; and periodically demonstrate reasonable progress toward reaching visibility goals. States are also responsible for periodic comprehensive updates to their Regional Haze SIPs that address these same topics.

Improving visibility at our most pristine places

In addition, improved visibility and the removal of haze-causing pollution from the atmosphere in order to promote increased visibility in Class I areas will result in environmental and economic benefits and improved health for Minnesota’s citizens and those in areas downwind of Minnesota. 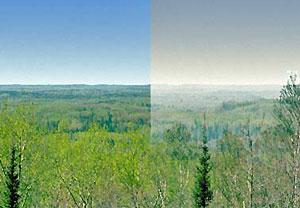 This photo shows the view from the Boundary Waters Canoe Area Wilderness visibility monitor. The left side illustrates visibility conditions on average for the 20 percent best days. The right side shows what the view looks like on average on the 20 percent worst days in BWCA as a result of higher levels of fine particles.