Ground-level ozone is a secondary pollutant formed through chemical reactions between nitrogen oxides (NOx) and volatile organic compounds (VOCs). Ozone can irritate the eyes, nose and throat, aggravate lung diseases, or increase the risk of premature death in people with heart or lung disease. In Minnesota, there are concerns because levels are relatively close to the national standards. 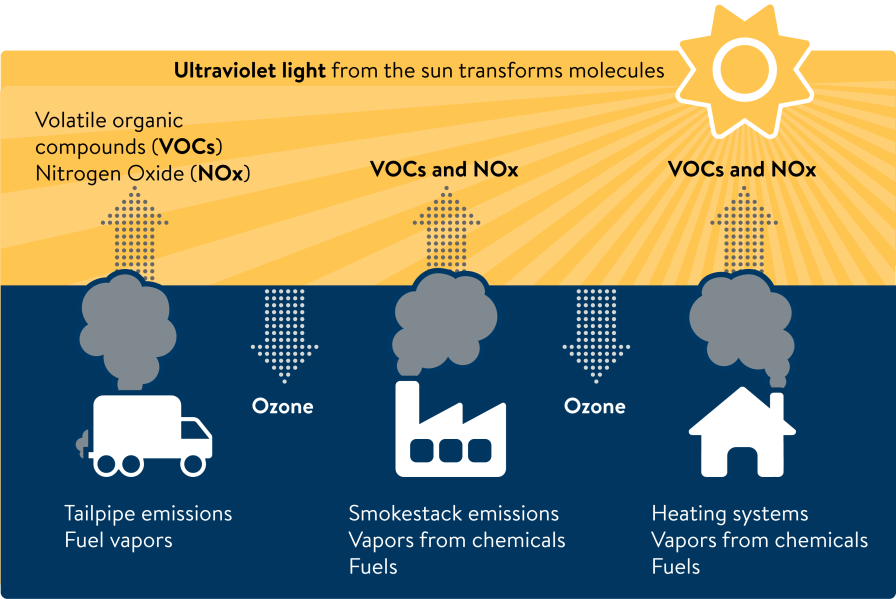 Ozone, unlike other criteria pollutants, is not emitted directly by any one source. Sources of the NOx and VOCs that contribute to ground-level ozone include vehicles, lawn and garden equipment, paints and solvents, refueling stations, factories, and other activities where fossil fuels are burned. Ground-level ozone, which exists in the atmosphere close to earth, is not the same as the "ozone layer" in the earth’s outer atmosphere.

Ozone can irritate the eyes, nose and throat, and can aggravate asthma, bronchitis, and other lung diseases. Exposure to high levels of ground-level ozone can increase the risk of premature death in people with heart or lung disease. Children, whose lungs are still forming, are at higher risk from increased ozone, particularly if they spend lots of time outdoors.

Rules requiring emissions reductions for power plants, vehicles, and other industries should reduce ozone pollution levels in Minnesota. However, the impacts of climate change, such as hotter summers and wildfires, raise ozone levels.