Particulate matter (PM) refers to various air particles, including dust, soot, smoke, and liquid droplets that range in size from less than 0.1 microns in diameter (smaller than a single bacterium) to about 10 microns (1/7 of the diameter of a human hair). Because they are so small, particles can be inhaled deep into the lungs. Inhaling high concentrations of particulate matter is associated with many health risks. 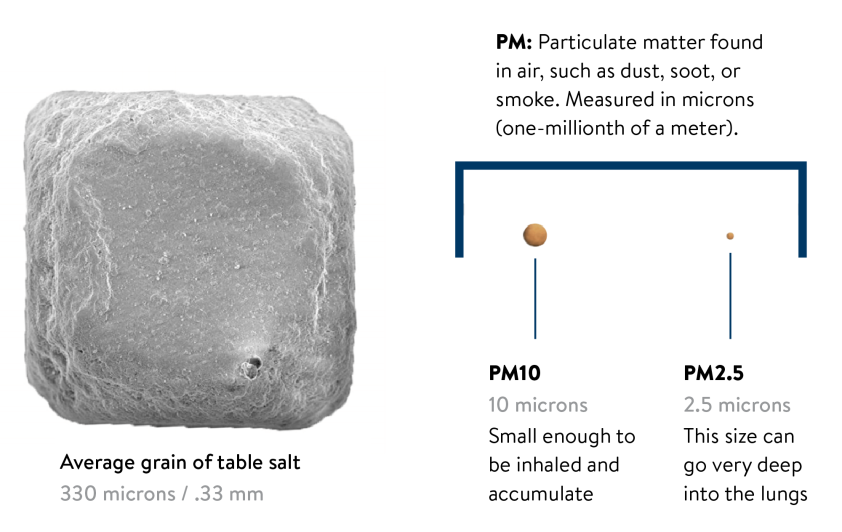 Particles are formed by chemical reactions among nitrogen oxides, sulfur oxides, organic compounds, and ammonia. In Minnesota, most of the particulate matter in our air is formed through these chemical reactions. Particles are also in emissions from vehicles, factories, and wood burning and come from unpaved roads and other sources.

Inhaling high concentrations of particulate matter is associated with an increased risk of heart attacks, irregular heartbeat, acute and chronic bronchitis, asthma attacks, and other respiratory issues that can result in hospitalization and even premature death for people with pre-existing heart or lung conditions.

Breathing in wood smoke can be harmful to your health. Burning produces tiny particles that can be drawn into your lungs and even enter your bloodstream. Short-term exposure to fine particles in the air can aggravate lung disease, trigger asthma attacks and acute bronchitis, and increase the risk of respiratory infections. Over time, breathing fine particles increases the chances of developing chronic obstructive lung disease, chronic bronchitis, cardiovascular disease, or lung cancer.

Minnesota is currently in compliance with national standards for all six criteria pollutants. However, fine particles levels are of concern because levels in the state are relatively close to the national standards.

While annual average fine particle concentrations are below levels of health concern, they can reach unhealthy levels several days each year.