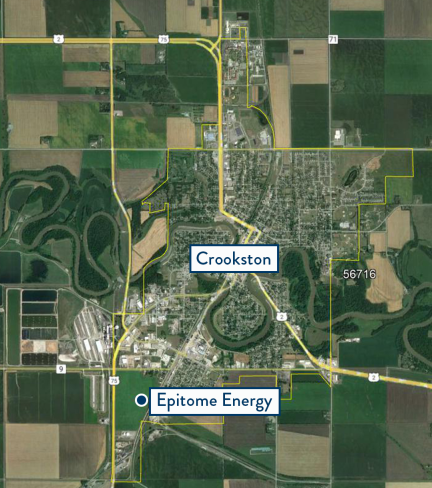 Epitome Energy, LLC, plans to construct a new soybean oil extraction and refining facility in Crookston, with a processing capacity of 120,000 bushels (3,600 tons) per day. The processing removes the soybean hulls, rolls the soybean into flakes, extracts oil from the flakes, and dries and grinds the de-oiled flakes into meal using solvent extraction. The oil will be sold both for biodiesel production and further processed for use in food. Construction and operation of the new facility requires an environmental review and a number of permits.

The facility's draft air permit is currently open for public comment through December 21, 2022.

In October 2022, the MPCA completed an environmental review that studied the potential impacts on local geology, soils, groundwater, surface water, and other potential environmental impacts. In the draft EAW, the MPCA found the project has minimal impact on groundwater and surface water. An air emission risk analysis (AERA) was conducted as part of the environmental assessment worksheet to quantify the potential cancer and non-cancer human health risks due to air pollution. The MPCA considers worst-case emissions from the facility and compares the results to health benchmarks. The results demonstrated that human health and the environment will be protected.

Epitome Energy has applied for an air permit from the MPCA. The facility is expected to emit fine particles, volatile organic compounds, and the hazardous air pollutant n-hexane. In addition, emissions from combustion sources also include nitrogen oxides, sulfur dioxide, carbon monoxide, other hazardous air pollutants, and greenhouse gases.

An air permit sets requirements on a facility's air emissions and operating limits to meet federal and state air quality regulations. The MPCA will draft an air permit and a technical support document with justification of the permit requirements.

Epitome Energy plans to store more than a million gallons of soybean oils, hexane, and smaller amounts of acids and bases in aboveground storage tanks at the facility. The MPCA regulates commercial storage tanks that hold substances that could be hazardous to the environment or human health if released. Tanks must be built and installed to meet a set of technical standards and comply with state rules and permits. Epitome Energy will need an aboveground storage tank major facility permit to operate its tanks. The permit will address leak prevention and detection, material transfer procedures, and secondary containment for potential leaks or spills.

Next steps and timeline

Upon completion of environmental review the facility begins the permitting process, starting with a draft air permit.

Sign up for email updates about this project, including opportunities for public input.